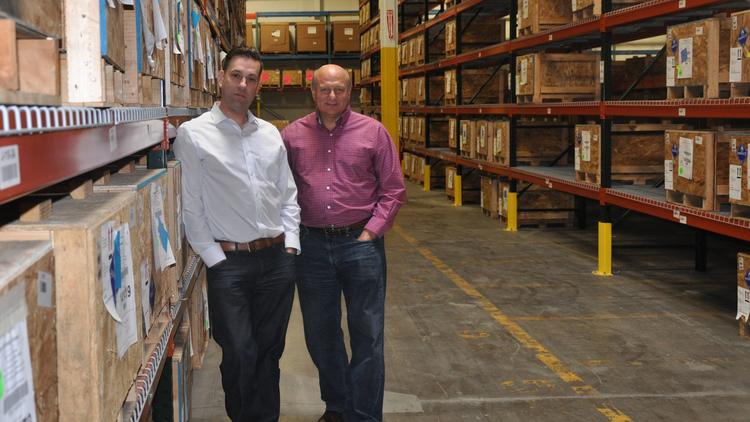 Captech Logistics, a warehouse and distribution company in Rotterdam, New York, has signed contracts with an Israeli lotion and cosmetics maker and a Swedish building supply company.

The year-old third-party logistics company also is close to an agreement with a high-end Belgian bicycle manufacturer.

“These are game changers for Captech,” said co-founder Allen Kintz.

Kintz is a former vice president at Kintz Plastics in Howes Cave. He left his family’s plastics manufacturing business after 15 years to start the third-party warehousing and distribution company with Dan Finkle, who helped build Finkle Distributors in Johnstown into a 320-employee business with $350 million in annual sales before selling the company to CoreMark International in 2010.

Captech is headquartered in the Rotterdam Corporate Park and operates seven warehouses around the New York that store emergency supplies and generators for the state Office of General Services. The Rotterdam park is the largest business park in the Albany region. The 245-acre park is owned and managed by the Galesi Group. Some of the largest tenants include Railex, Fedex Freight and Price Chopper’s frozen foods distribution center.

Captech opened for business with an empty warehouse and no customers in November 2013 and expects to end this year in the black. Captech stores and ships grinders, pumps and other parts and raw materials for E/One in Niskayuna and General Electric in Schenectady and SUNY Polytechnic Institute in Albany.

Kintz and Finkle have signed an agreement with Aderet Cosmetics Ltd., an Israeli e-commerce company that distributes lotions, shampoos, oils and other skin care products. Aderet sells products through Amazon.com and is a supplier for Burlington Coat Factory and Beall’s.

Captech will receive shipping containers from Israel that will be trucked to the Rotterdam industrial park from the Port of New Jersey where the product will be stored. Captech employees will pick, repackage and ship the lotions and tanning products as orders arrive. Orders received through Amazon must be picked and shipped on the same day that the order comes in.

Let us do the heavy lifting while you focus on growing your business.