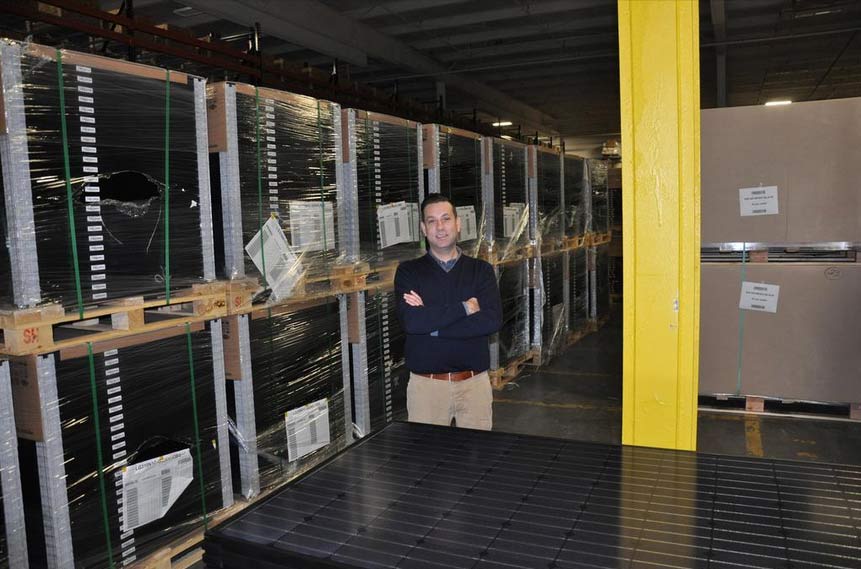 Allen Kintz and Dan Finkle are preparing to open a second warehouse and distribution center after signing contracts to serve as the East Coast fulfillment center for two German companies that supply solar panels and building materials.

Captech is preparing to double its capacity by leasing a second 50,000-square-foot warehouse in Schenectady or Montgomery county. A deal is expected to be signed by the end of December.

The demand for more storage space has been driven by two new contracts. Captech reached an agreement this summer to serve as an East Coast distribution center for BayWa r.e. Solar Systems, a German solar panel company that supplies panels to solar installation companies.

“We literally are moving thousands of panels each week,” Kintz said.

Captech currently is storing about 18,000 solar panels and parts that are shipped in by boat, train and tractor trailer. As orders come in, the company distributes panels throughout the eastern United States and Canada.

Captech also reached a new deal last week to serve as the East Coast fulfillment center for 475 High Performance Building Supply, a German and Dutch company that supplies skylights, adhesive tapes and air duct systems. The company expects to transport 50 pallets of materials in and out of Captech’s distribution center each month.

Kintz said Captech’s payroll has doubled from four employees at the beginning of this year to eight. The company also employs another eight people who operate emergency storage warehouses that are located around the state.

Captech’s business model has changed from the original vision when the company opened its warehouse in November 2013. Kintz said the majority of Captech’s clients distribute products that are tailored to the clean and alternative energy sector. The logistics company also has attracted several international customers, which was not part of the game plan when the company was formed.

When Captech selects the location for its second warehouse, Kintz said the company plans to enter a new arena — cold storage. The company has received several requests from suppliers searching for refrigerated storage space. To help meet the demand, the new location most likely will include cold storage space, he said.

Let us do the heavy lifting while you focus on growing your business.